Visual Studio Code Vs Atom: Which Code Editor Is Better

This Visual Studio Code vs Atom comparison explains the features and compares the two most used source code editors of the modern world:

A source code editor may sound mundane to some people, but it is the heart of so many software companies around the world.

While there are loads of editors to choose from, the most appropriate one tends to speed up the productivity of the developer by providing different plugins and components that take the responsibility for things like Syntax highlighting, diff, macros, code-snippets, preview options, debugging, compiling and deploying any software programs.

The relevant selection of source code editors has become pivotal for the developers as they spend an enormous amount of time when it comes to selecting software.

In this tutorial, we will compare the two most famous source code editors that are used to build modern web and cloud applications viz Visual Studio Code and Atom.

A source code editor is constructed exactly for the editing code of software programs. It may be a solo application like a text editor or a collection of tools that make it an Integrated Development Environment.

This tutorial explains the features of two mostly used source code editors of the modern world which are more of a text editor than a traditional IDE i.e. Visual Studio Code and Atom.

Text editors come with features like customizable appearance, syntax highlighting, ability to add third-party plugins to enhance the user experience that make it different from the typical word processors.

We will be comparing these two code editors so that the developers will not have a hard time choosing an apt code editor as per their requirement.

Before comparing, let’s have a brief outline of the Visual Studio Code and Atom as per the official documentation.

Visual Studio Code: Visual Studio Code is an editor advanced to build state-of-the-art web and cloud applications. It is available for Windows, macOS, and Linux. It has built-in support for JavaScript, TypeScript, and Node.js. For official documentation, you can refer here

Atom: Commonly known as the Hackable text editor for the 21st century, it comes for Windows, macOS, and Linux. It supports plug-ins written in Node.js. It is developed by GitHub. For official documentation, you can refer here

VS Code Vs Atom: A Tabular Comparison

Let’s have a glimpse of the features that Visual Studio Code and Atom offer. This indeed will help to decide which editor to use as per the requirement.

Atom Vs VS Code: Feature-Based Comparison

The comparison between these two editors will be done based on the below categories.

#1) Setting Up The Editor

Let’s have a look at the installation steps involved in the Visual Studio Code and Atom. Based on that, we will come to know, which gets more attention to the user when it comes to the Setup. 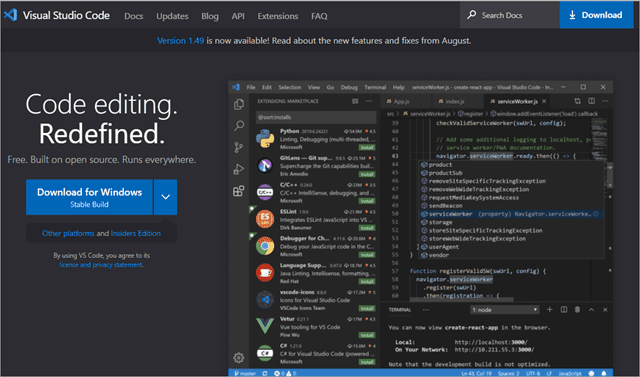 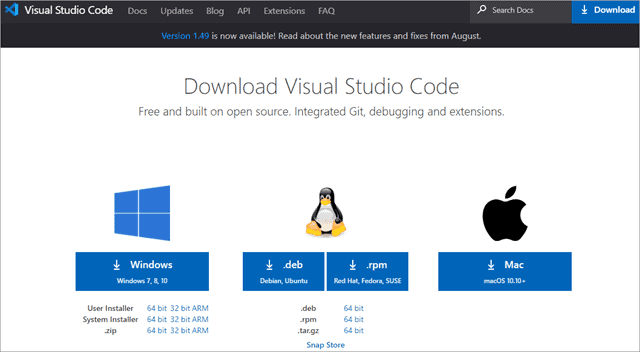 Step 2: Now run the executable file. As you run, you will see the below window. 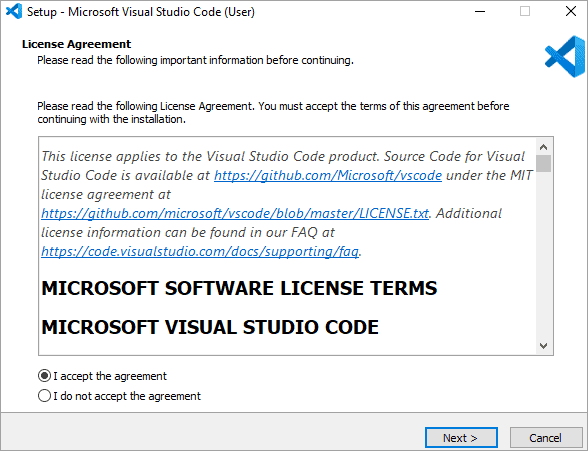 Step 3: Select the option “I accept the agreement” and click on Next.

Step 4: From the below-shown window, browse the path and click on Next.

Step 5: Select the Start menu folder from the below window and click Next. 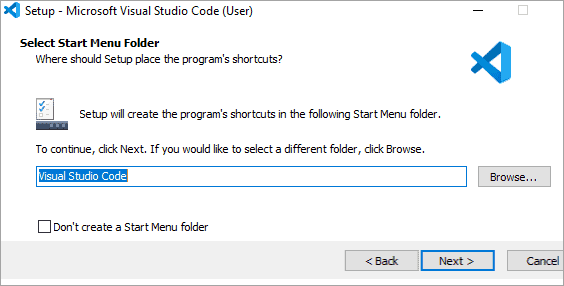 Step 6: Select the additional tasks that you would like to perform from the below window. 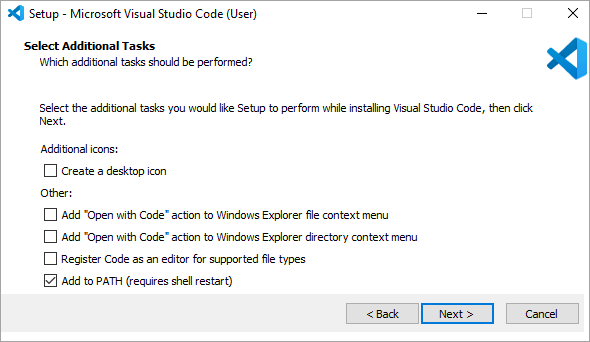 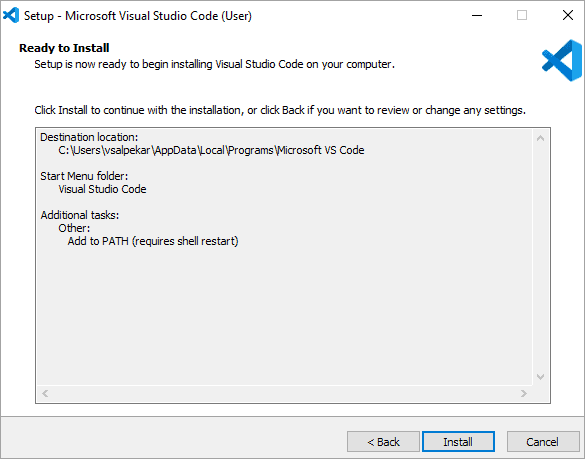 Step 8: As the installation gets completed, you will land on the below window. 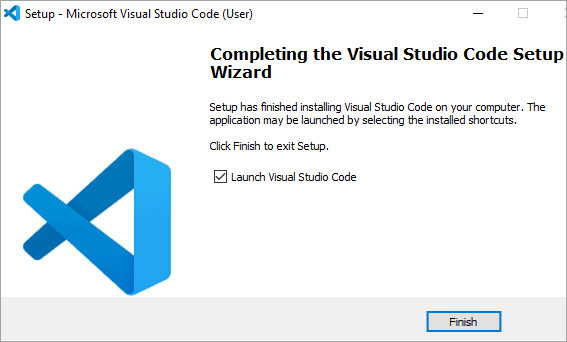 Step 10: As you click on finish, the Visual Studio Code gets launched. 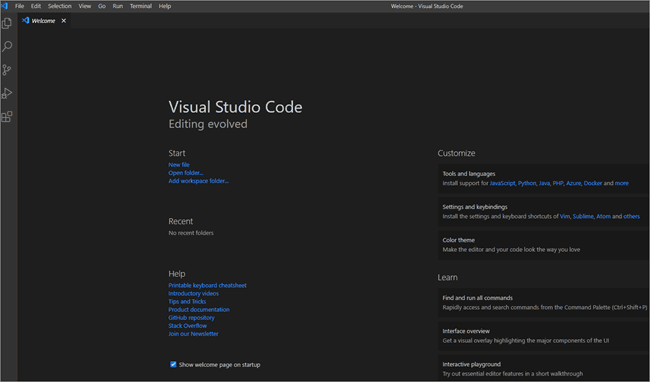 To know about the installation steps of the Atom editor, please refer here.

When you see the installation steps, both Visual Studio Code and Atom get installed in a couple of clicks. Apart from installation, both the editors involve setup in which the user can add extensions as per the requirement.

When you consider Visual Studio Code, there are more built-in features, hence the users need to go to extensions only in case of customizations. In the Case of Atom, mostly the features come from extensions.

Design is the most disputed factor when it comes to comparing Visual Studio Code and Atom. Knowing that it depends on the developer’s own choice to rate any code editor in terms of Design, still we will bring some key points that will help to decide easily.

Due to CSS being involved in the design, we can create our own customized themes for both Visual Studio Code and Atom. The well-constructed UI is the one that does not divert you or make you imagine about it even for a juncture.

Having said all the above, when it comes to contrast, Atom Material UI has done excellent work by taking it one step ahead of Visual Studio Code on the Design front.

Visual Studio Code users often tend to its performance when correlated to Atom or other Electron-based applications. The reason for such a kind of performance difference is due to the approach used in the development of these two applications.

Visual Studio Code has a firmly composed crux set of functionalities with plugins adding exterior level features. On the contrary, the Atom uses an extension-based approach to almost everything. Hence, undoubtedly it has advantages but shortcomings too.

So, when the number of plugins increases in Atom, it adds the sluggish behavior by placing it behind the Visual Studio code in terms of performance.

When it comes to extensions and customization, there appears a lot of configuration. Flexibility and usability are mostly defined by the amount of configuration that can be done in any single application.

In Atom, you will get a Graphical User Interface everywhere replacing the singular JSON. Also, there is complete seclusion between the editor settings and the extensions that take the usability to the next level.

User Experience matters the most when it comes to comparing the two code editors of the modern world. From a fresher to the veteran in the Software Industry, the finest User Experience is all that everyone needs. When we say finest, that means how convenient it is to use the editor, how delightful it is to write a code in the editor.

When it comes to User Interface, Atom has a basic GUI, still, Visual Studio Code looks decent. Both the editors offer a huge number of extensions that are easy to add and configure.

Core features define the actual caliber of an application. You can bring value to an application if the core features are powerful. Visual Studio Code has more out of the box features than Atom. It not only has the features of the Integrated Development Environment but a lot more too.

Being Microsoft’s flagship editor, Visual Studio Code brings Core features like Building and Debugging apps, Git Integration, Markdown support. It also has a preview functionally that lets you check your README.md file before uploading it to GitHub. 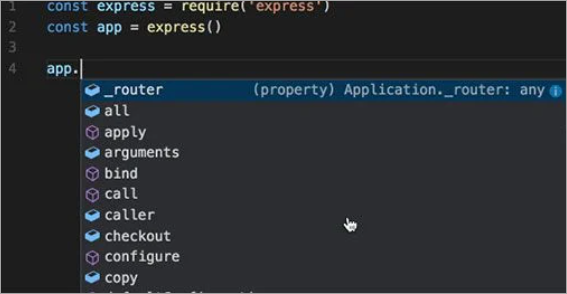 For atom, most of the features come from the extensions. It offers a great amount of customization by providing extensions for almost everything. Though Atom has fewer Core features, it does have a built-in Git integration.

Elasticity is where the Visual Studio Code and Atom largely differ. For Visual Studio Code, plugins are the way of adding features like language support, Editor themes, and much more that help to write robust code.

Atom gives more capability to the plugins. Being the Hackable Editor of 21st Century, Atom has a bundle of built-in and third-party plugins that make it powerful than Visual Studio Code in terms of plug-ins.

Having a large community and userbase signifies the short SLAs for resolving any customer query. Also, it encourages active development in the case of an open-source application.

Atom being the product of the GitHub, git integration is the built-in feature. When you edit a file, the treeview points out the uncommitted files through color. Along with this, you can see the name of the currently pointed branch on the status bar of the editor.

As of now, Visual Studio Code has many GitHub-related extensions, however, none of the extensions can clone the offerings that Atom gives. Due to the recent acquisition of GitHub by Microsoft, there are positive hopes for the Visual Studio Users.

Answer: It is because the features that Visual Studio Code offers are more of in-built features whereas to use the same features in Atom, you must come from the extensions. Hence Atom sometimes shows sluggish behavior when it comes to speed.

Q #2) Is Visual Studio Code based on Atom?

Q #3) Is the Atom owned by Microsoft?

Answer: Atom is owned by GitHub which in turn is acquired by Microsoft. So, if you ask about the actual owner, it is the GitHub.

The main difference between a text editor and an IDE is that IDE comes with a lot more offerings like debugging, compilation whereas text editors mainly focus on editing all types of files without giving attention to the language in which the code is written.

Be it Visual Studio Code or Atom, every editor has its own benefits and drawbacks. The editor that is suitable and meets the requirements of one developer may not necessarily meet the requirement of another developer. The offerings of both are somewhat the demand of the modern-day development solutions.

Assuming you are beginning with coding and searching for a proofreader, you can pick any out of both, as both have an abundant number of highlights that are needed for a beginner coder. One thing to call attention to here is that you should give your hands a shot with these editors to get well acquainted with the highlights, easy route keys.

If you are already using Visual Studio Code and thinking to switch to Atom, then you will get disappointed as both provide almost the same features still Atom lags in performance when compared to Visual Studio Code.