In this Tutorial, we have provided the Most Important Java 8 Interview Questions & their Answers with Code Examples & Explanation:

These are very common questions which you will be asked in any Java interviews that demand advanced skills. These concepts are must-have if you are going to appear for any standard Java Certification Exams like Oracle Certified Associate (OCA).

This article will be very much suitable for both Java Developers as well as Java Testers/Automation Testers or anyone who is looking for higher pay in the same field because it demands advanced Java skills.

Q #1) List down the new features introduced in Java 8?

Answer: New features that are introduced in Java 8 are enlisted below:

Q #2) What are Functional Interfaces?

The annotation used for creating a new Functional Interface is “@FunctionalInterface”.

Q #4) What are the default methods?

Answer: Default methods are the methods of the Interface which has a body. These methods, as the name suggests, use the default keywords. The use of these default methods is “Backward Compatibility” which means if JDK modifies any Interface (without default method) then the classes which implement this Interface will break.

On the other hand, if you add the default method in an Interface then you will be able to provide the default implementation. This won’t affect the implementing classes.

Q #5) What are the main characteristics of the Lambda Function?

Answer: Main characteristics of the Lambda Function are as follows:

Q #6) What was wrong with the old date and time?

Answer: Enlisted below are the drawbacks of the old date and time:

Q #7) What is the difference between the Collection API and Stream API?

Answer: The difference between the Stream API and the Collection API can be understood from the below table:

Q #8) How can you create a Functional Interface?

Answer: Although Java can identify a Functional Interface, you can define one with the annotation

Below is the programming example of FunctionalInterface written for multiplication of two numbers.

Answer: In Java 8, a new feature was introduced known as Method Reference. This is used to refer to the method of functional interface. It can be used to replace Lambda Expression while referring to a method.

Then the corresponding Method Reference would be,

where “::” is an operator that distinguishes class name from the method name.

It returns the corresponding string representation of the argument that is passed. The argument can be Character, Integer, Boolean, and so on.

Q #12) What is a Predicate? State the difference between a Predicate and a Function?

Answer: Predicate is a pre-defined Functional Interface. It is under java.util.function.Predicate package. It accepts only a single argument which is in the form as shown below,

Q #13) Is there anything wrong with the following code? Will it compile or give any specific error?

Answer: Yes. The code will compile because it follows the functional interface specification of defining only a single abstract method. The second method, printString(), is a default method that does not count as an abstract method.

Answer: Stream API is a new feature added in Java 8. It is a special class that is used for processing objects from a source such as Collection.

We require the Stream API because,

Q #15) What is the difference between limit and skip?

Answer: The limit() method is used to return the Stream of the specified size. For Example, If you have mentioned limit(5), then the number of output elements would be 5.

Let’s consider the following example. The output here returns six elements as the limit is set to ‘six’. 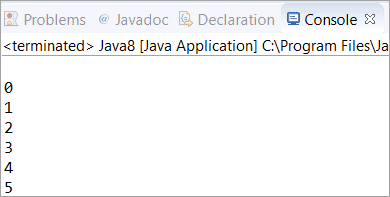 Whereas, the skip() method is used to skip the element.

Let’s consider the following example. In the output, the elements are 6, 7, 8 which means it has skipped the elements till the 6th index (starting from 1).

Q #16) How will you get the current date and time using Java 8 Date and Time API?

Answer: The below program is written with the help of the new API introduced in Java 8. We have made use of LocalDate, LocalTime, and LocalDateTime API to get the current date and time.

Answer: The Stream.limit() method specifies the limit of the elements. The size that you specify in the limit(X), it will return the Stream of the size of ‘X’. It is a method of java.util.stream.Stream

Where ‘X’ is the size of the element.

Answer: The below program generates 5 random numbers with the help of forEach in Java 8. You can set the limit variable to any number depending on how many random numbers you want to generate.

Answer: The below program generates 5 random numbers with the help of forEach in Java 8. You can set the limit variable to any number depending on how many random numbers you want to generate. The only thing you need to add here is the sorted() method.

Q #20) What is the difference between Intermediate and Terminal Operations in Stream?

These types of operations (Intermediate Operations) process data when there is a Terminal operation carried out. Examples of Intermediate operation are map and filter.

The second block successfully executed because of the Terminal operation sum().

Q #21) Write a Java 8 program to get the sum of all numbers present in a list?

Q #22) Write a Java 8 program to square the list of numbers and then filter out the numbers greater than 100 and then find the average of the remaining numbers?

Answer: In this program, we have taken an Array of Integers and stored them in a list. Then with the help of mapToInt(), we have squared the elements and filtered out the numbers greater than 100. Finally, the average of the remaining number (greater than 100) is calculated.

Q #23) What is the difference between Stream’s findFirst() and findAny()?

The findFirst() is predestinarianism in nature whereas the findAny() is non-deterministic. In programming, Deterministic means the output is based on the input or initial state of the system.

Q #24) What is the difference between Iterator and Spliterator?

Answer: Below is the differences between Iterator and Spliterator.

Q #25) What is the Consumer Functional Interface?

Answer: Consumer Functional Interface is also a single argument interface (like Predicate<T> and Function<T, R>). It comes under java.util.function.Consumer. This does not return any value.

In the below program, we have made use of the accept method to retrieve the value of the String object.

Q #26) What is the Supplier Functional Interface?

Answer: Supplier Functional Interface does not accept input parameters. It comes under java.util.function.Supplier. This returns the value using the get method.

In the below program, we have made use of the get method to retrieve the value of the String object.

Answer: Nashorn in Java 8 is a Java-based engine for executing and evaluating JavaScript code.

Q #28) Write a Java 8 program to find the lowest and highest number of a Stream?

Answer: In this program, we have used min() and max() methods to get the highest and lowest number of a Stream. First of all, we have initialized a Stream that has Integers and with the help of the Comparator.comparing() method, we have compared the elements of the Stream.

When this method is incorporated with max() and min(), it will give you the highest and lowest numbers. It will also work when comparing the Strings.

Q #29) What is the Difference Between Map and flatMap Stream Operation?

Map Example – Map Stream operation is generally used for simple operation on Stream such as the one mentioned below.

In this program, we have changed the characters of “Names” into the upper case using map operation after storing them in a Stream and with the help of the forEach Terminal operation, we have printed each element.

Here we have carried out flatMap operation on “List of List of type String”. We have given input names as list and then we have stored them in a Stream on which we have filtered out the names which start with ‘S’.

Finally, with the help of the forEach Terminal operation, we have printed each element.

Answer: In Java 8, a new feature was introduced to store classes. The area where all the classes that are stored in Java 8 are called MetaSpace. MetaSpace has replaced the PermGen.

Till Java 7, PermGen was used by Java Virtual Machine to store the classes. Since MetaSpace is dynamic as it can grow dynamically and it does not have any size limitation, Java 8 replaced PermGen with MetaSpace.

Q #31) What is the difference between Java 8 Internal and External Iteration?

Answer: The difference between Internal and External Iteration is enlisted below.

Answer: JJS is a command-line tool used to execute JavaScript code at the console. In Java 8, JJS is the new executable which is a JavaScript engine.

Answer: ChronoUnits is the enum that is introduced to replace the Integer values that are used in the old API for representing the month, day, etc.

Answer: In Java 8, a new class was introduced in the package java.util which was known as StringJoiner. Through this class, we can join multiple strings separated by delimiters along with providing prefix and suffix to them.

In the below program, we will learn about joining multiple Strings using StringJoiner Class. Here, we have “,” as the delimiter between two different strings. Then we have joined five different strings by adding them with the help of the add() method. Finally, printed the String Joiner.

In the next question #35, you will learn about adding prefix and suffix to the string.

Q #35) Write a Java 8 program to add prefix and suffix to the String?

Answer: In this program, we have “,” as the delimiter between two different strings. Also, we have given “(” and “)” brackets as prefix and suffix. Then five different strings are joined by adding them with the help of the add() method. Finally, printed the String Joiner.

Q #36) Write a Java 8 program to iterate a Stream using the forEach method?

Answer: In this program, we are iterating a Stream starting from “number = 2”, followed by the count variable incremented by “1” after each iteration.

Then, we are filtering the number whose remainder is not zero when divided by the number 2. Also, we have set the limit as ? 5 which means only 5 times it will iterate. Finally, we are printing each element using forEach.

Q #37) Write a Java 8 program to sort an array and then convert the sorted array into Stream?

Answer: In this program, we have used parallel sort to sort an array of Integers. Then converted the sorted array into Stream and with the help of forEach, we have printed each element of a Stream.

Q #38) Write a Java 8 program to find the number of Strings in a list whose length is greater than 5?

Answer: In this program, four Strings are added in the list using add() method, and then with the help of Stream and Lambda expression, we have counted the strings who has a length greater than 5.

Answer: In this program, we have created two Streams from the two already created lists and then concatenated them using a concat() method in which two lists are passed as an argument. Finally, printed the elements of the concatenated stream.

Q #40) Write a Java 8 program to remove the duplicate elements from the list?

Answer: In this program, we have stored the elements into an array and converted them into a list. Thereafter, we have used stream and collected it to “Set” with the help of the “Collectors.toSet()” method.

In this article, we have understood the new features introduced in Java 8. We have covered all major Java 8 interview questions and their answers in detail.

After perusing this instructional exercise, you probably acquired information about the new APIs for date-time control, new highlights of Java 8, new Streaming APIs alongside the able programming models according to the idea. These new ideas or the highlights are essential for the screening when you are up for the really difficult Java Positions.