This Tutorial Explains the Quicksort Algorithm in Java, its illustrations, QuickSort Implementation in Java with the help of Code Examples:

In the quicksort algorithm, a special element called “pivot” is first selected and the array or list in question is partitioned into two subsets. The partitioned subsets may or may not be equal in size.

Partitioning is the key process of the Quicksort technique. So what is partitioning?

A pivot value can be any of the following:

Consider the following diagram that explains the partitioning process.

The above diagram shows the process of partitioning array by repeatedly selecting the last element in the array as a pivot. At each level, note that we partition the array into two sub-arrays by placing pivot at its correct position.

Next, we list the algorithm and pseudo-code for quicksort technique that also includes partition routine.

The general algorithm for quicksort is given below.

Given below is the pseudo-code for the quicksort technique.

Let’s see the illustration of the quicksort algorithm. Take the following array as an example. Here we have selected the last element as pivot. 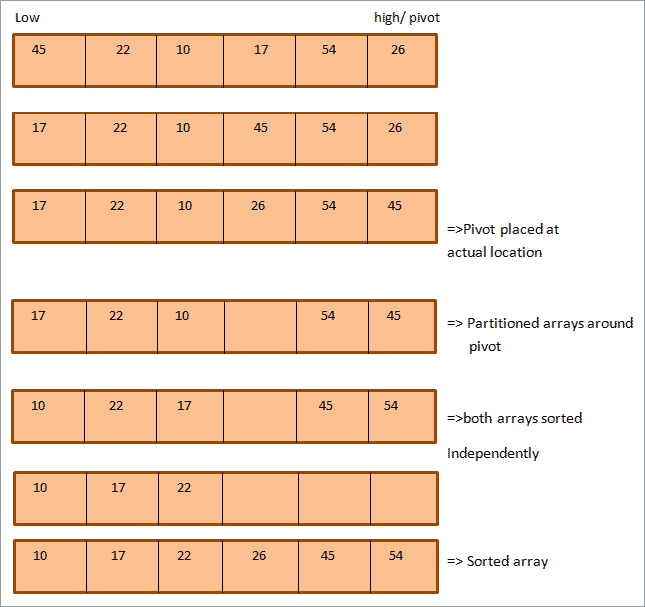 As evident in the above illustration, there are two pointers, high and low that respectively point to the last and first elements of the array. Both these pointers are moved as the quicksort progresses.

The above steps are carried out until both the pointers cross each other in the array. Once they cross, the pivot element gets its proper position in the array. At this point, the array is partitioned and now we can sort each sub-array independently by recursively applying a quick sort algorithm to each of the sub-array.

QuickSort technique can be implemented in Java using either recursion or iteration. In this section, we will see both of these techniques.

We know that the basic technique of quicksort illustrated above uses recursion for sorting the array. In the recursive quicksort after partitioning the array, the quicksort routine is called recursively to sort the sub-arrays.

The below Implementation demonstrates the quicksort technique using recursion.

In iterative quicksort, we use the auxiliary stack to place intermediate parameters instead of using recursion and sort partitions.

Answer: Quicksort uses a divide and conquers strategy. Quicksort first partitions an array around a pivot element selected and generates sub-arrays that are sorted recursively.

Q #2) What is the time complexity of Quicksort?

Answer: The time complexity of quicksort on an average is O (nlogn). In the worst case, it is O (n^2) the same as the selection sort.

Q #3) Where is Quicksort used?

Answer: Quicksort is mostly used in recursive applications. Quicksort is the part of C-library. Also, almost the programming languages that use built-in sorting implement quicksort.

Q #4) What is the advantage of Quicksort?

Q #5) Why is Quicksort better than the merge sort?

Quicksort is considered as the best arranging calculation fundamentally as a result of its proficiency to sort even a tremendous informational collection in O (nlogn) time.

Quicksort is also an in-place sort and doesn’t require additional memory space. In this tutorial, we have seen the recursive and iterative implementation of quicksort.